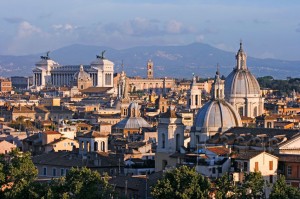 it has been a great honour for me to organize the 1999 Biennial Meeting of the European Low Gravity Research Association in Rome, and it has also been challenging to do it one year apart from the Jubileum. Actually you will find most of the town upset by ongoing restoration processes and people at work on the main streets everywhere. Hopefully, this is the cost that Rome has to pay for getting a majestic appearance back by the year 2000, and, as a consequence of this, we all have to expect – and possibly accept – some organizational gaps due to the whole ongoing chaotic situation.

Still, just the fact that this year’s Meeting is the last for ELGRA in the present millennium is extremely significant: a new era in the history of human space exploration is just opening and we are now preparing for the future. In fact, NASA has finally decided to get prepared to a trip to Mars and the first elements of the ISSA have been already put up there, some 400 km from the Earth, waiting for colonization by multinational crews by the year 2003 or so. It has been finally understood that microgravity has to be used non only for military or operational reasons, but also as a tool for better understanding and consequently manipulating many biological phenomena. Glenn’s fantastic enterprise has recently generated a new thrust in human life sciences research in space, now clearly showing the possibility of better exploring aging processes by microgravity-dependent reversible changes. Moreover it is getting clearer and clearer that the ability to obtain pure chrystal growth up there will be rewarding on Earth in terms of pharmacology (biomolecule production and purification) and of fluid/material sciences, both damping through the years deliberated costs once the system has been operating long enough.

This makes our Biennial Meeting unique and it’s up to all of us to take this opportunity to turn the corner of the third millennium with the proper attitude.

In fact, another feature makes this congress unique too: at the turning of the new era ELGRA decided that a direct signal of cooperation should be given and accepted to take the risk to let some organizational defects become apparent when fixing to do something new. For the first time, then, an ELGRA Biennial Meeting has been under the responsibility of a team made of members of the Management Committee coming from three different Institutes: Marianne Cogoli, our Life Sciences Vice-President, from ETH, Zurich, Switzerland, acted as the Scientific Secretary, Libero Liggieri, from ICFAM CNR, Genoa, Italy, helped in the preparation and distribution of the first and second announcements and I myself, from INRCA, Rome, Italy, was the local organizer, with the experienced support of three wonderful senior scientists, Prof. Aristide Scano, the President of the Italian Aerospace Association (AIMAS), Prof. Giuseppe Riondino, the Scientific Coordinator of Rome’s INRCA Institute and Prof. Claudio Franceschi. the Scientific Coordinator of the whole INRCA Institute, whom I thank for his skilful and enthusiastic thrust in promoting innovative studies on aging.

Dr. Michele Ferrari from ICFAM and Dr. Roberta Vacca-Torelli from AIMAS were also very active, although keeping behind the curtains, just ready to intervene when needed, namely very often, thus widely contributing to the success of the Meeting.

As usual, we made all efforts to keep different discipline communities together in the spirit of ELGRA, hoping that interactions might fertilize each other and generate new ideas, especially in the young generations: each day will therefore host all disciplines. Posters will be regarded as equally interesting as oral presentations and will be hopefully discussed thoroughly by all interested participants during specifically allotted time.

The social events were designed to offer something new to the many people already coming to Rome before for other meetings or on holiday: we therefore obtained a private visit to the freshly restored and opened Galleria Borghese, allowing us to enjoy the enchanting beauty of Canova’s statues among the rest, and we tried to keep the menu for the Gala Dinner as close as possible to the Italian style.

We therefore hope you not only a fruitful scientific outcome, but also a wonderful time in Rome, which, although crowded with people and traffic jams, keeps the charming attitude of an elegant woman: not too rape as a teenager, nor too tired as an old lady, just surprising, attractive and sophisticated as we like it.